Standing at the top of one of the ruins at Altun Ha: Nov 2013

My husband is awesome. When I asked him if we could go to Belize for our honeymoon so I could see some of the areas my dad made his grandiose drug run, he said yes. One spot I had to check out was something marked on all maps, but nothing a tourist would go see – The Northern Highway.

The Northern Highway has a lot of history. Much of it unpublished or hard to find. The original Northern Highway was cut off from construction because when they cut into a part of the jungle, they were given “good-news-bad-news.” The good news was, they discovered a Mayan Temple (Altun Ha), the bad news was they had to halt construction permanently. The road is now referred to as the Old Northern Highway and it is full of rotting black top and plenty of pot holes that now lead tourists to the poplar historical site.

Here’s an excerpt from Sugar Alpha when they hunted marijuana in the jungles near Altun Ha:

“Yes, it is,” Rudy nodded, “and my brother-in-law is the caretaker there.” Roger flashed his famous grin at Eddie. “Do I take care of my staff or what?”

“That you do,” said Eddie, and settled back into his seat, content.

They made good time when they headed south on the Old Northern Highway and turned off at the entrance to Altun Ha while the sun was still above the treetops. They followed a dirt road through the thick vegetation for a mile and a half, past many shacks and small houses, until they reached a large grass parking lot. Roger slung his knapsack over one shoulder for the short hike to the site and grinned at Eddie, whose face was lit up like a kid on Christmas morning.
“This is so cool,” he almost whispered as the sun touched the treetops in the distance and they started walking with their haul bags toward the ruins, some of which he could see through the foliage.

A huge weathered pyramid stood boldly at the edge of the site, a large, bare field with a primal jungle backdrop. Watchmen guarded the site to keep grave robbers from stealing the precious artifacts.

“There are over two hundred structures here,” Rudy told Eddie, “But many of them are still covered by the jungle like the ones we saw before.

Eddie stared around him in awe. “I can still feel them,” he said as the sunset intensified its eerie aura, “even though they’ve been gone a thousand years.”

The day we visited Altun Ha, it was pouring rain. But our fearless guide showed us the whole site telling us that Altun Ha was known as a trading post, especially for jade. But there most precious jade is now being kept locked safe in a bank.

Back to the Northern Highway…

Much of the Northern Highway’s history is unpublished, especially anything from the 1980’s and anything eluding to drug smuggling. However, in a March 2008 an article on 7NewsBelize.com eluded to it’s clandestine past, “In the marijuana boom of the 1980’s, the Northern Highway – with its long stretches of pavement was the runway of choice for drug planes. It got so bad that at one point, that upright poles were erected on the shoulders of the highway to prevent planes from landing. But those days have gone, and for some time we haven’t heard of drug planes landing on one of Belize’s main highways. But it happened this morning [March 2008] – a sign of either increased desperation or daring on the part of drug runners.”

However, with some help of the some friends and my dad’s extensive memoirs, I was able to put together the details of one of the most extraordinary runs of this era! Here’s an excerpt from Sugar Alpha when Roger was scouting the area in Belize for a airplane landing strip:

En route to Indian Church, they crossed the nearly completed Northern Highway and its long runway-like features. The road-scarred land stuck out as it cut through the lush bush of the flatlands. Roger leaned back in the noisy cabin and asked George when the highway would open.

“Hard to say time-wise,” George answered. “Task-wise, they only have a couple more bridges to finish before it will be passable.”

“Let’s fly up the highway for a while,” Roger told Romero, pointing northward, “and see how the construction’s going.” Roger wanted to see how many places there were along the highway to put down a large plane, but he didn’t want his pilot to notice, so he took some pictures with George’s camera of what he called “cool images” of waterways and farms. When they reached the spot where the new route intersected with the old road, they flew over Orange Walk on up to Progresso, a small village on the western shore of Progresso Lagoon, where Roger had landed most of his past runs on a strip disguised as a cane road next to the lagoon’s ghastly white water that made it so easy for the pilots to find. They did one picture pass, then turned south along the Hondo River, which marked the border between Belize and Mexico… 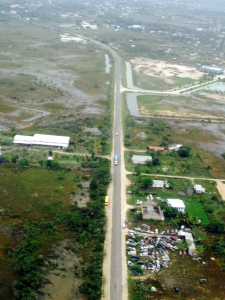 A Photo I took of the Northern Highway taken near the Belize Int’l Airport: Nov 2013

…A few minutes later, they reached the Sand Hill junction and George drove through a ditch to avoid a cement pillar blocking the entrance to the new Northern Highway. As he lumbered back onto the smooth surface, Roger marveled as they drove at high speed that such a modern thoroughfare existed here.

“There are a lot of places to land on this road,” Roger said, “and absolutely nobody around to see us.”

“I think we’re too late for that,” George said, sighing. “Tomorrow they officially open the highway.”

“Yeah, well let’s do some odometer readings anyway,” Roger said, undeterred as he looked at the well-constructed highway. “You never know how things might work out.”

It took little time on the new route before they reached the end where it merged back into the old road, and soon after that they stopped at a toll booth. Roger noticed several smashed and burned cars rusting in the humidity just off the road as George paid their toll and they continued on their way.

I couldn’t believe how narrow the Northern Highway was! Especially to think that such a large plane as a DC3 landed there. I couldn’t help but replay this excerpt as they shrugged off how awesome of a job Jeff did:

Roger got aboard the Lear and flew to Indianapolis, where he met Jeff in a motel overlooking Weir Cook International Airport. He paid off his pilot the same way he had his co-pilot; fee plus bonus, plus he kept his half of the Sugar Alpha money.

“Thanks, pardner,” Jeff said appreciatively. “Mighty generous of you.” With business concluded, they went to a nearby restaurant for drinks and dinner and when their drinks arrived, they clinked their glasses together.

“Sugar Alpha,” Roger said, and they drank. Roger wiped his mouth and grinned at his pilot. “To tell you the truth, I didn’t think you could do it.”

“It was a pretty narrow runway,” Jeff said. Roger finished his drink in one long swig.

“No, I mean doing the whole gig without killing Billy Bob.”

It was so awesome to retrace some of my father’s steps. If all we did was take in the sights, it was worth being in the country alone, just seeing what my father had seen. It’s hard to believe that he did all these escapades at an age younger than I am now! What an amazing life he lead. Cheers to the adventures wherever they may take you!

I am in a unique situation where I have the unusual combination of vast experience and youth: I have amassed over 11,000 skydives and am still incredibly active in the sport. I have also occupied a diverse array of positions beginning as a drop zone owner’s kid, working manifest in exchange for jumps, up to becoming a World Record Organizer, participant, and pilot, a dropzone owner myself, the wife of a dropzone owner, and a Content Manager for Dropzone Marketing. From all the hat’s I’ve worn, I have garnered a lot of insight, vision, and relevant experience that can help move skydiving forward from every aspect of the sport.

I have a lot of passion and energy to continue giving back to skydiving. Driven by my dedication to this wonderful sport, I would love and appreciate the opportunity to serve on the USPA Board of Directors.

As the co-creator for the competitive discipline 4-Way Vertical Formation Skydiving, I have an intimate understanding of the effort and engineering required to develop and promote a brand-new discipline: how a team would be filmed, judging criteria, judge requirements, and competitor involvement.

Recently, I was a part of the group responsible for recreating rules for the Vertical Sequential World Record. The group’s efforts were met with frustration because none of the decision-making entities were vertical flyers, and thus, they did not understand why we were making the suggested changes. Through dedicated effort and time spent educating, we were successful in passing the rule changes.

I’m surprised over a decade later at the lack of vertical disciplines recognized on the board. There is currently only one board member who freeflies for fun. I would love the opportunity to be a voice for 4-Way Vertical Formation Skydiving, Vertical Sequentials, angle flying, and freeflying in general.

Today’s marketing approach requires digital savvy, strategy, and direction. Not many people realize the time and energy it takes to manage the duties of a proficient marketer: sourcing images, implementing and following a strategy, and creating and scheduling social media posts on multiple platforms. USPA currently employs only one person on staff, the Director of Sports Promotions, to fulfill this duty. The current Director of Sports Promotion is left to navigate and educate through social media with little support or direction from the board.

An important element that has been missing for years in skydiving is diverse, consistent, and relevant communication both within and outside of our community. It is important the Sports Promotion Director not only promotes outside of the sport to get people into skydiving but also helps our current skydivers understand what is happening within our community—especially with regard to upcoming discussions, changes, and happenings within USPA. Even for me, a long-time skydiver, a lot of decision making seems to be a mystery. In addition to increased transparency within the organization, it is imperative we examine how we can engage more jumpers for longer and inspire jumpers to participate competitively at local and national levels.

We are very fortunate to have a current Director of Sports Promotion who is savvy and educated in digital marketing. However, I propose creating a committee of support so we can share, educate, and have a broader spectrum to communicate with our community – not just in Parachutist articles or surveys—but with direct communication through supported email and social media campaigns.