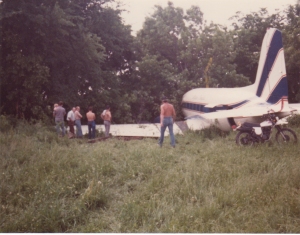 “Tell him his next jump’s on me and I’ll—” Roger said, stopping short as he realized that the windsock had turned 180 degrees since they took off. Then he realized something else and turned toward the end of the runway to see Mr. Douglas on short final – for a downwind landing. He grabbed the radio from the cup holder.

“Abort, Mr. Douglas! abort,” he shouted as he watched Mark float the DC-3 over the threshold toward a mid-runway touchdown so he wouldn’t have to taxi as far.

No response, no change in flight path. The DC-3 touched down as Chris reached over and turned the radio on.

“Abort-abort-abort!” Roger shouted again, but it was too late. The plane rolled out and the tail dropped. Roger gestured for Chris to follow the plane, then they watched helplessly at the tail waving side to side as Mark tried to stop his beloved machine before it reached the end of the runway.